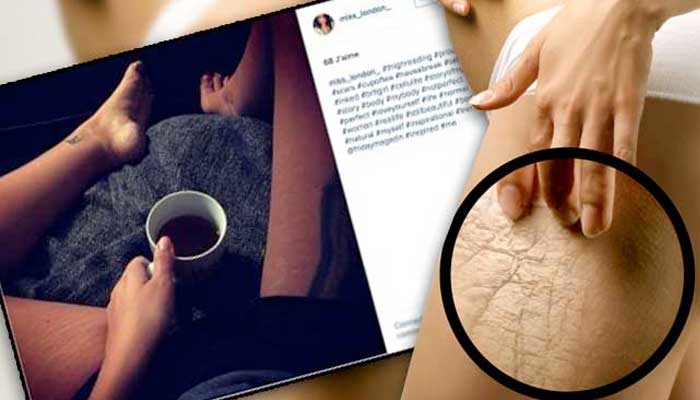 Many women are celebrating their skin imperfections by posting photos of stretch marks, scars, wrinkles and other skin imperfections on social media with the hashtag #ThighReading. The movement started when a young woman, known by the Twitter handle of @princess_labia, tweeted a photo of the stretch marks on her thighs along with the caption, “palm readings <<<< thigh readings”.

When some of the nearly 10,000 Twitter users already following the “princess” saw the tweet, they immediately began tweeting photos of their own, and in no time at all, #ThighReading was trending like wildfire. An ever-increasing number of women from all over the world are now proudly posting pictures of their thighs on both Twitter and Instagram – cellulite, stretch marks, scars and all.

According to those in the know, the trend is about women owning their bodies and not being ashamed of showing off the marks and imperfections that accumulate during life. A student and actor, @princess_labia described how the idea came to her. “I was sitting on my couch … looking at my thighs and feeling the grooves of my stretch marks, and the thought that they looked like lifelines, like a palm reading, just came to me,” she said. “Something that is as normal, common and beautiful as stretch marks is something we’ve been taught to be ashamed of, to be alone with.”

Because many of her tweets are about “imperfections” on her own body, @princess_labia was initially surprised at both the level and rapidness of the response she received from other young women. “… I didn’t think this was going to be something my followers responded to differently than most other things, but girls started sending back pictures of their thigh readings, and then it just went on from there.”

While not everyone who responds to #ThighReading is comfortable enough to share their own photos, they are being supportive of those who do so. The trend, which is rapidly gaining international attention, is considered a “celebration” of the natural imperfections and flaws all women have – no matter the size, length or shape of their thighs. Considered by many to be part of the body positivity movement, everyone is invited to join in without fear of judgement or competition.

The landslide of photos making their way onto an increasing number of social media sites feature inner thighs, outer thighs and other body parts that women usually consider less than lovely. Many of the women participating in the trend consider their imperfections as sources of pride. “Stretch marks from my eating disorder,” one woman posted along with photos of faded mark on her legs. “They hold the strength it took to survive.”

The creator of the trend said the overwhelming response hasn’t been limited to photos and posts from women – an increasing amount of men are sending messages and posting their own photos.